Electrotyping of books in mid-Victorian Britain. 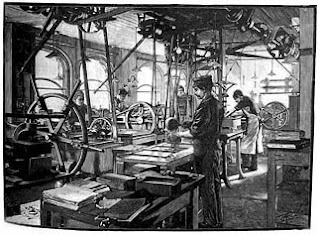 In Wakeman’s Victorian Book Illustration, he states at the end of a brief section on electrotyping (p.76):

“It is likely that by the second half of the century many, if not most, wood engravings used in bookwork were printed from electrotypes. This, at least, was the practice recommended by contemporary writers on the printing of illustrations, mainly to avoid the danger of the block breaking.”

By the mid-1850s, it is clear that the use of electrotyping in book and magazine production was becoming systematic.

In 1854, the Cyclopaedia of Useful Arts  by Charles Tomlinson was published. It contains a long article on electro-metallurgy. Towards the end of the article, in Other Applications of the Art, Tomlinson writes:

“Mr . Palmer has also applied the electrotype to the art of engraving. The principle of the invention consists in depositing copper in the grooves of engravings, made in a layer of some soft substance spread on a sheet of copper, and covering the whole with a sheet of electrotype copper. The counterpart of the engraving thus produced, is used in printing in the same manner as woodblocks; that is, they can be made up with the type, and printed from, at the ordinary printer’s press.

It is clear that the process developed rapidly also in New York, as is evidenced from Chapter 10 of Abbot’s book on The Harper Establishment (of New York). This dwells at length upon the use of electrotypes for printing the entire texts of books.

“The [electrotype] plates are all minutely examined when they are cast, and are properly trimmed and finished. They are made as nearly as possible of a uniform thickness. Of course, there must be one plate for every page of the book to be printed.

The accumulation of electrotype plates in a large establishment that has been long in operation is very great. In the Harper Es­tablishment, the stores now on hand are enormous. Those of the Magazine [i.e. Harper’s Magazine] alone are rapidly approaching ten thousand.

The plates are stored in subterranean vaults built under the streets that surround the building. … The vaults extend underground for two hundred feet in length, and in dimensions are eight feet wide by eight feet high. They are shelved on both sides, and the shelves are load­ed with plates—stereotype or electrotype—representing all the works published in the establishment. There is one plate for ev­ery page of every one of the many hundreds of volumes which the house publishes, making from fifty to seventy tons in all.

When a new edition of any book is required, the plates are brought out from these vaults and put upon the presses. When the work is finished, they are taken back again to the vaults.”

Frederick Wilson looked back on the development of electrotypes in his work: Stereotyping and electrotyping (p. 105, 1880):

“Electrotypes for printing purposes were greatly improved by Mr. Victor Morel, a French cabinet maker, who possessed a knowledge of what was then known as the “Bitumen” process. This consisted of producing plates by means of shellac and sand, and making them type high by mounting on arched metal blocks. But owing to the difficulty experiences in repairing the plates, this process was ultimately discarded. M. Morel was afterwards employed by Messrs. Cassell, Petter and Galpin, who were then erecting a foundry, and we are much indebted to the experiments conducted at great expense by this firm for the perfection obtained by modern electrotypers.  At their works wax was first adopted for moulding purposes, which material is now universally used in this country, although, singularly enough, gutta-percha is almost exclusively used in the continent.”

It is likely that Cassell undertook these developments in electrotyping from the 1850s onwards. Cassell’s Magazine (1853-) and Cassell’s Penny Readings (1867) are typical of this publisher’s aspiration to sell to a mass market, with a consequent need to maximise printing production.  In the late 1850s, George Murray Smith must have been planning the launch of the Cornhill Magazine (commenced January 1860). As Cooke makes clear (p.49-50), Smith personally oversaw the creation of the illustrations, and the quality of the proofs taken from the wood engravings. However, to meet the anticipated demand for each monthly issue, the most effective and rapid means of printing production had to be employed, most likely within Smith, Elder’s own premises. This meant the stereotyping of the text pages, and, as Smith explains in the Preface to the Cornhill Gallery (1864), owing to the pressures of production, electrotypes were used to reproduce the illustrations:

“In offering the Cornhill Gallery to the notice of the public, the publishers have been influenced by two considerations:

1.         A desire to render an act of justice to the eminent Artists of whose talents they have availed themselves in the illustration of “The Cornhill Magazine”, by exhibiting, with the aid of the finest printing, the real quality of those illustrations, as Works of Art. The impressions of the Pictures which have appeared in the various numbers of “The Cornhill Magazine” were unavoidably subjected to the disadvantage of being printed from electrotype casts taken from the Wood-blocks, and with great speed necessary to insure the punctual publication of a Periodical Work which enjoys the favour of a very large circulation. The Wood-Blocks themselves have now been printed from for the first time, in the production of the Cornhill Gallery; and the Publishers trust that, with the very careful and skilful aid of the Brothers Dalziel, the Pictures are now  produced in a style which will place them in their proper rank as Works of Art.”

Nicolas Barker (p. 261) states that the making of electrotypes, for large print runs, was normal practice for Macmillan &Co. from the 1850s:

“If sales, though adequate, were likely to be of short duration, the book was printed from the type it was set in. If it had a longer life, stereotype plates were made from the type by moulding it in papier-mâché and casting hard metal in them; the plates could be faced with nickel for extra strength. If it [the book] enjoyed both large sales and a long life, the extra expense of electrotype plates was called for. Pages placed in an acid bath were covered in copper by electrolytic action, and the copper ‘shells’ filled with hard metal. Roughly speaking, type was good for a run of 20-25,000 [copies], stereos for 50,000, and electros for anything up to 300,000; in practice, these figures were often exceeded.”

Electrotypes too were also used for the production of Tenniel’s illustrations for Alice in Wonderland and Through the Looking Glass. Mark Arman related (p.5):

“ … a complete stranger tapped on our door… he had brought to show me a complete set of Alice in Wonderland and Alice Through the Looking Glass electrotypes, all 92 of them.”

As with the Cornhill Magazine, one can speculate that the high volume of public demand for the Alice books meant that both stereotyping and electrotyping were used by Clay (the printers), to maximise production.  Further research may yet show that the printers of other magazines of the 1860s, such as Good Words, and Once a Week, were also using electrotypes to reproduce wood engravings. In the 1860s, Good Words was printed successively by Constable (1860, 1862); by Bradbury, Evans and Co. (1863-1866); and by Virtue & Co. (1867-1869). It is possible printers such as these had sufficient capital to be able to invest in the equipment for the large scale creation of electrotypes. Commercial considerations alone may have prompted them to copy the production methods of Smith, Elder, when the Cornhill Magazine was being produced in the 1860s.

These examples show without doubt that electrotyping of wood engravings was being used by publishers/ printers, both in London and in New York, from the 1850s onwards.

Edmund M B King
My career at the British Library was from 1975 to 2012. I was head of the BL Newspaper Collections from 1999 to 2012. My bibliography on Victorian Decorated Trade Bindings was published in 2003. A review of it is published in the Victorian web: http://www.victorianweb.org/art/design/books/king/kinsella.html All the entries in my 2003 book have been entrered into the BL bookbindings database: http://www.bl.uk/catalogues/bookbindings/KeywordSelection.aspx I have catalogued the bindings of the books in the De Beaumont collection in the British Museum (some 400 books and magazines). https://research.britishmuseum.org/research/collection_online/search.aspx Currently, engaged in writing 'mini-histories' of UK newspapers published 1800-1850, Many Pinterest Boards at: . https://www.pinterest.co.uk/edmundking/